Last week I went on a behind-the-scenes tour of the National Museum of American History.  Hal Wallace, the Smithsonian’s Associate Curator of Electronics and Electricity, was my guide.  Hal showed me a number of fascinating devices that professional eavesdroppers have used since the mid-1800s.

Here are two pocket wiretaps from the 1860s, each no bigger than a cigarette holder.  These handy little devices had both “send” and “receive” functions.  During the Civil War, military wiretappers used them to intercept rival telegraph messages and disseminate disinformation about troop movements. 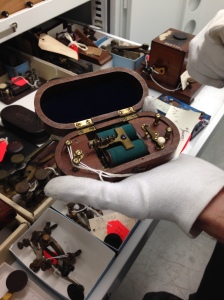 This is a Morse “Secret Sounder” device, made to look just like a pocket watch.  These hit the market around the turn of the twentieth century:

Electronics engineers seem to have had an easy time turning watches into listening devices.  A half-century later, professionals eavesdroppers had the wristwatch transmitter at their disposal.  The notorious San Francisco private investigator Harold Lipset demonstrated a device like this one to a Congressional subcommittee on communications privacy in 1965.   Lipset had bugged the room in advance of the proceedings, and, at the end of his testimony, he played back his opening remarks for rhetorical effect. 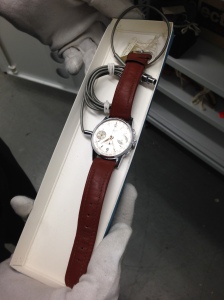 Many thanks to Hal Wallace for a fascinating tour.